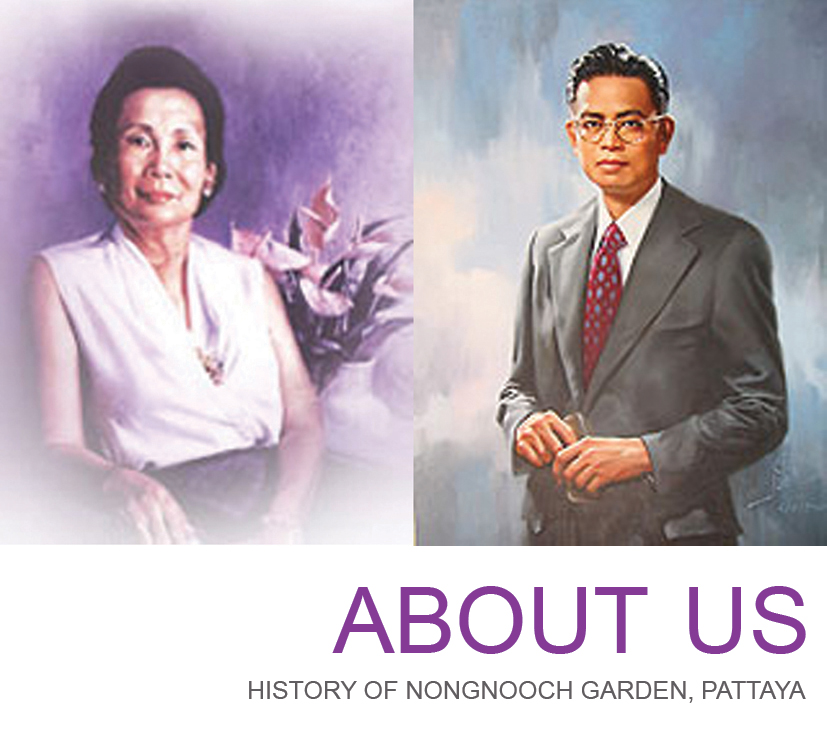 In 1954, Mr Pisit and Mrs Nongnooch Tansacha bought 1,500 rai (approximately 600 acres) of rolling hills and valleys between Pattaya-Sattahip at the 163 kilometer marker on Sukhumvit road in Najomtien, Sattahip, Pattaya in Chonburi Province. The newly purchased land was anticipated to become a fruit plantation of mangoes, oranges and coconuts as well as many other local fruits.

During her trip abroad, Mrs Nongnooch was inspired by the beauty of world renowned gardens and decided to turn the fruit orchard into a tropical garden of ornamental flowers and plants. The garden was later turned into a tourist attraction fully equipped with accommodation, a swimming pool, restaurants, and banquet and seminar halls for the tourist’s convenience.

Nongnooch garden opened to the public in 1980, and added to the garden was a daily Thai cultural show and elephant show within the theater. Three years later, the garden management was handed over to her son, Mr Kampon Tansacha, and today is one of the most popular attractions of Thailand as well as a center of world botanical significant under the concept “a garden for all people of this world”.

Presently, Nongnooch garden is a very popular tourist attraction with an area of over 1, 700 rai welcoming tourists from all over the world. More than 5,000 people visit each day and the garden has also been recognised as one of the top ten most beautiful gardens in the world. It is rated highly by global websites and has received numerous honors and awards